What Makes An Ideal Plaintiff? 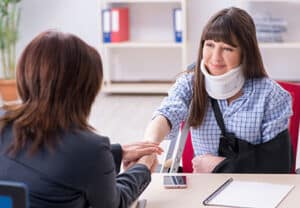 Despite the fact that 95 percent of personal injury cases settle before trial, it is important to consider the ultimate value of a claim if it were to go to trial. One of the biggest factors of the value of a claim is the plaintiff—the person who has been hurt and is seeking compensation. When considering what makes a good plaintiff, we also have to consider what makes a good defendant. For example, as defendants, medical doctors tend to win at least eight out of 10 jury trials in Illinois.

Many people wonder how it’s possible to do so well in court; the answer has to do with something psychologists call the halo effect, which refers to the reality that a professional, well-dressed, good-looking, and polite person will do much better in court than the average person. If a jury finds a defendant to be likable, then that will generally translate to the jury believing that the defendant didn’t do anything wrong; if a jury finds a plaintiff to be likable, they will award that plaintiff more compensation. This phenomenon, and the halo effect more generally, comprises the primary subject matter of this book.

A modern jury is composed of people who have an irrational fear that someone is getting a free ride or has it easy. For this reason, many jury members are immediately suspicious of plaintiffs. In part, this is due to the fact that insurance companies and large businesses have intentionally tried to make juries suspicious of plaintiffs. For example, in the McDonald’s lawsuit involving hot coffee, the plaintiff was made out to look stupid, and as if she got away with a ton of money without having really suffered injuries. These opinions, however, are not true; the plaintiff, Stella Liebeck, suffered second and third-degree burns on her genitalia and spent a decent amount of time in the ICU due to the severity of her injuries. The award was reduced substantially on appeal and she wound up not receiving very much in the end.

In order to overcome the disadvantage faced by plaintiffs at the beginning of a case, the plaintiff must have what I like to call the Rocky factor. The Rocky factor is based on the hard luck boxer from Philadelphia whom everyone likes, whether they’re liberal, conservative, Republican, Democrat, old, or young. People who have the Rocky factor end up doing a lot better in and outside of court. Oftentimes, insurance companies will simply pay them off in order to avoid going up against them at trial.

About 80 percent of my clients express a lack of desire to pursue their case or say they are not the “suing” type, but feel like they have no other choice. This sentiment is a manifestation of the fundamental attribution error, which occurs when a person attributes their own behavior to the circumstances, but attribute other people’s behavior to their character. For example, a person might claim that they stole bread only because they were starving, while at the same time accuse another person of stealing bread simply because they are a thief. The same sentiment applies to personal injury cases in that many people will characterize a plaintiff’s desire to obtain compensation as an expression of greed, laziness, or manipulation.

The fundamental attribution error is particularly common in slip-and-fall cases. For example, a juror might think that if a plaintiff slipped and fell, then it was because they are clumsy or overweight, or because there is something wrong with their character. However, if it happened to that same juror’s family member, then they likely wouldn’t have the same perception. This is true under the principle of ethnocentrism, which describes people’s tendency to believe that the people they are personally associated with are better than the people with whom they’re not personally associated.

The Rocky Factor: How to Overcome the Bias

People who have the Rocky factor try to lift themselves up and fight back against otherwise negative circumstances. For example, there are two ways to approach the physical therapy that might follow a rotator cuff injury from an auto accident. The first approach is guided by a negative mindset and the belief that physical therapy will take forever and not provide much benefit. If the average rotator cuff injury requires six to eight months of therapy after surgery, then the person who approaches the recovery process with this negative mindset might take nearly twice as long to recover.

In contrast, a person who has the Rocky factor will take the second approach, which is guided by a positive mindset and the belief that working hard will pay off. In fact, many of my clients who had the Rocky factor told me that they ended up enjoying physical therapy sessions so much that they bonded with the therapist and never missed a single session; those were the type of clients who would often recover in half the amount of time as the average person. These clients were also eager to get back to work as quickly as possible, and never asked if they should continue to stay home with the expectation of recovering for the lost wages. A plaintiff with the Rocky factor will likely be a good actor in all aspects of their life. For example, they might be engaged in charity work, which would make them even more likable in the eyes of the jury.

In every Rocky movie, Rocky is faced with adversity, and as a result, must go through his own personal training sequence. Similarly, the plaintiff will go through a training sequence. The Rocky factor can benefit both plaintiffs and defendants. I once handled an auto accident case wherein the defendant couldn’t be found without private investigative work; it turns out the defendant was difficult to locate because she was overseas conducting free missionary work. This made her look like a good and likable person in the eyes of the jury, which made her a difficult defendant to sue.

As an attorney, it is not hard to quickly determine whether a plaintiff or defendant has the Rocky factor. For example, I’ve found that people who complain about past attorneys or doctors during a consultation with me are not likely to have the Rocky factor, and might have a difficult time working closely with professionals. Another way to determine whether a person will be likable in front of a jury is to consider how they behaved at the scene of the accident. For example, if they were yelling obscenities to the driver who hit them, then that might indicate that they don’t do well under stress, and therefore might not do well in a stressful deposition. On the other hand, someone who does have the Rocky factor—and who would likely do well in front of a jury—might show concern for the person who hit them and offer to help.

I once defended a woman who was struck by a person who crossed over a median driving 45 miles per hour. The impact was so severe in this high-velocity collision that my client’s hip joint broke such that the ball of the hip broke off and spun back around the wrong way in the joint space. On top of that, both of her ankles broke. She required external fixator devices on both ankles and a hip replacement. Despite suffering such serious injuries, her first inquiry was about the well-being of the driver who hit her. Her second inquiry was about when she was going to be able to return to her job as a road grader operator; it was physically demanding work that required her to operate very large road grading machinery, but she enjoyed it, and her sole focus was on getting back to being able to do it. This woman is an example of someone who has the Rocky factor—someone who is able to show grace under pressure (even when they’ve been wronged), and someone who is eager to work hard and resume their lives.

As a last example, I will discuss Peter, a plaintiff I once represented. Peter was struck while in a crosswalk on his bicycle; Peter had the right of way, and the driver of the vehicle failed to yield. Peter’s feet were clipped into the pedals, and his knee was more or less destroyed by the impact. However, he loved to cycle so much that all he wanted to do was get back on the bike and get back to training as soon as he could. Due to the severity of the injury, he faced surgery and a long road to recovery, but I could tell right away that he was going to apply himself and fully engage in the recovery process. We took video of his first day at home and his first physical therapy training session. During the first day at home, he decided on his own accord to not only complete activities of daily living the best he could from his wheelchair, but also lift small weights with his upper body. We captured some of that on video, which ultimately helped us secure a policy limit settlement for the case. For this reason, I always try to capture my clients’ training sessions on video. In the end, Peter got back to cycling and almost fully recovered from the injury. Had Peter chosen to complain about his setback rather than stay positive and push himself to recover, the outcome wouldn’t have been as positive. In these cases, it can be effective to have the doctor essentially complain on behalf of the plaintiff, perhaps by saying something like the following:

Question: Doctor, can Peter face any future difficulties because of his injury?

Meanwhile, the following communication would be on record for Peter:

Question: Peter, how much functionality have you gotten back with your knee since you’ve finished physical therapy?

Answer: I’m doing the best I can and I’ve gotten a lot of it back. I have a plan for the future that involves home exercises, and I’m going to keep working out on my own so I hope to get back even more.

Since the doctor complains on Peter’s behalf, a jury is much less likely to question the validity of the injury, and at the same time, the integrity of the Rocky factor is maintained. In other cases, we might have family and friends tell the negative side of the story.

For more information on An Ideal Plaintiff In A Personal Injury Case, a free initial consultation is your next best step. Get the information and legal answers you are seeking by calling (815) 495-5598 today.

Get Help Now
Home » What Makes An Ideal Plaintiff?

How to Double your Chances of winning Your Personal injury Case